Yesterday, I delivered a quilt to my Charity Bee that will be donated to the local Relay for Life event.  They will raffle it off to raise money for the American Cancer Society.

Our guild (Cotton Patch Quilters) has made about 10 of these quilts over the last 5 years and they have raised a fairly large amount of money each year.  The guild members are given instructions as to color and size of the blocks (mostly 4 patches and 1/2 square triangle blocks).  When we receive them, the charity group trims them down to the actual size needed and one of us takes all of the blocks home and pieces the top.  That was my job this time!!! 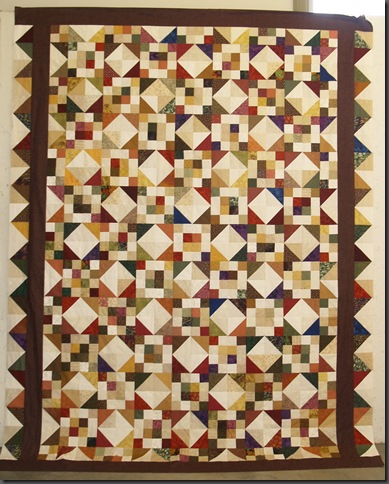 The proportions on this quilt ended up a bit whacky so we used some of the leftover 1/2 square triangles and pieced a border for the sides of the quilt.

One of our members (Ellen) will quilt it on her long arm machine and another member (Nancy) will put the binding on.

We are pleased with the final product and are already planning the next one to be made!!!!

Today I started on a second wall hanging using a rust dyed panel from my friend, Anita and her husband Bill.   I asked Bill to think about a vase of flowers when he did this dye and he came up with a bunch of  wonderful designs.    Unfortunately I didn’t take a photo of the piece before I started working on it.

As I started thinking about what to do on this quilt, I was looking at a crocheted doily that my Grandmother had made and I got an idea to include a doily for the flower vase to sit on.  I wanted to try it out first, so I got online and found a few photos that might work….. 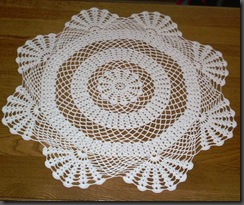 This was one of my favorites and the perspective was pretty good as well so I traced out a basic design and started to practice. 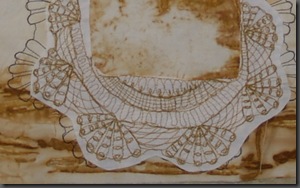 I was pleased with the design and was amazed at how easy it was to do……. 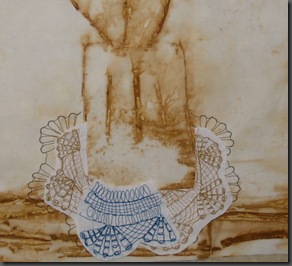 My husband suggested that I might want to use blue instead of brown, but I decided to stay with the monochromatic theme.

I also decided to make the doily a little bit bigger. 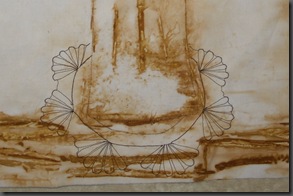 The first step was to draw the basic outline of the doily on golden threads paper and sew around the outline.  I then filled in the “shell” designs with stitching. 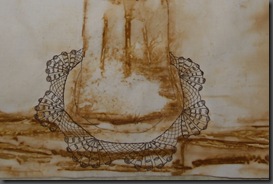 Next step was to fill in the  first round…. 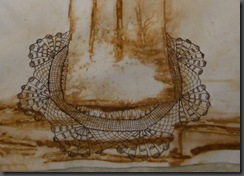 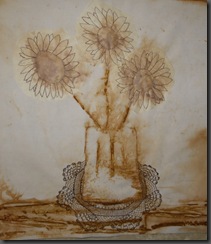 Next I used the golden threads paper to draw the sunflowers and then I stitched around them to transfer the design to the fabric piece. 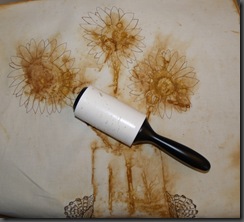 The final step for the day was to remove the Golden Threads paper.  One trick that I have learned is to use a lint roller to remove the little bits of paper that get stuck in the stitching.

Hopefully I can get more time in the next day or so to work on this…..it has been a blast so far!!!!

The first of these was actually for the month of October, but I didn’t get it finished by the end of the month. 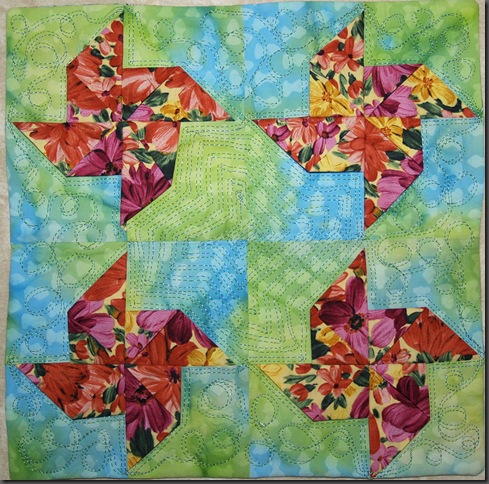 It was a fun (and fast) quilt and I really like the look of the 3-D pinwheels.  I decided to play with the quilting and tried using a double needle with a blue thread on one side and a green on the other.  The first problem arose when I was doing straight lines and wanted to turn a corner…..you cant keep the needle in the piece and make the turn!!!

I really like the way that the loops look with the two needles, but the back doesn’t work well since the threads sit on the top of the back and dont lock inside the batting….but I liked the look of the stitch to use it again on my guild challenge piece (previous post).  But, that time I didn’t use a dual needle, but instead just quilted the loops in two passes. 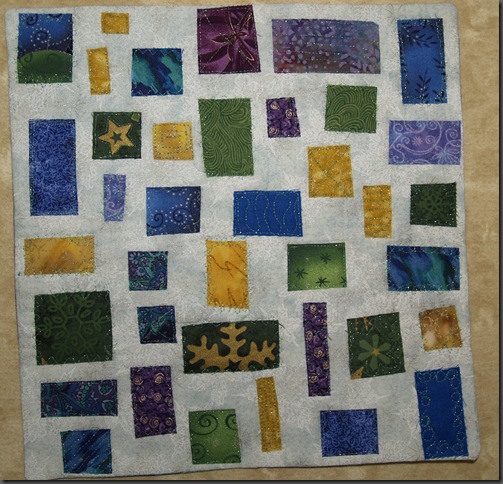 The final quilt was for December and it was an easy fusible mosaic design.  I decided to use colors other than the traditional red and greens and was pleased with the blues, greens, golds and purples.

It was a wonderful and fun year of making monthly calendar quilts and I am truly thankful to Kandy Newton and her cohorts from the BQL for making the challenge possible.

It was very rewarding to finish the last quilt and post photos just before midnight on the 31st of December!!!!  And, it was exciting to hang the January quilt in my studio.

Tuesday night was the reveal party for our guild challenge. The rules were that the quilt had to be 24 inches and had to include at least 2 forms of contrast.

When I first started thinking about this project, I asked my husband (who is a scientist) if he could think of contrasts that occur in science. He thought for a minute and said “The only one that I can think of is “Waves” and “Particles”. My answer was “dont think any further…that one is perfect.” 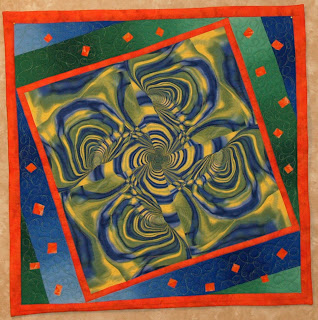 When I got ready to work on it, I was SO excited to find the blue and yellow tie-die print fabric on my shelf. I have NO idea where it came from, but I immediately knew that it was going to be the basis for the piece. I photocopied a section of the fabric and cut it into squares so that I could play with how to put it together to make the wavy pattern. I then cut the fabric squares and sewed them together.

As I was trying to plan the borders, I saw the Caryl Bryer Fallert gradation fabrics that were left over from the “Peacock” quilt and thought they would look nice in the piece. I also realized that the dark and light could be another of my contrasts. Once I decided to put the center square on a wonky point, I ended up losing a lot of the contrast because I cut off the darkest and lightest parts!!

The final step was quilting the piece. I wanted to do some trapunto work on it, but didn’t have a lot of time to spend, so I tried a technique that I have read about on some of the blogs that I follow. You use two different battings….the bottom one is a wool batt and the top one is a polyester. Supposedly, as you stitch LOTS in the non-trapunto areas, the wool gives it a good base and the polyester puffs up. I may not have done enough stitching to get that full effect, but at least it did give a bit of puffiness to the top.

The double decker “sandwich” was wonderful to quilt on, but I found it really hard to make the edges stay flat. I may take the facing strips off and add a few more quilting lines to the final border and see if I can flatten it out some more.

On a fun note, my quilt was selected as the favorite in the guild, and I won a prize consisting of fabric and other fun goodies.

As is always the case, I truly enjoyed the process of making a quilt to conform to a set of parameters. I find it to be a freeing thing!!! I have also learned that in these situations, I seem to work better when I wait till the last minute. The BEST challenge pieces that I have made have been done in the day or two before it was due!!

On a work note, I am working hard to get all of my ducks in a row before income tax season gets started…..so far so good!!!

I had a great day today even though I didn’t make it into my studio.  I have a new computer and today I was able to……

-  Set up a bluetooth keyboard and mouse

-  Set up a new printer to run on a wireless network

-  Debug the internal webcam so that the computer would hibernate properly

-  Debug the hotsync between my computer and my phone.

The internet is a wonderful place to find solutions to your computer problems…..just search using a description of the problem and you can normally find someone who has struggled with the same thing and often someone has already posted a solution.

My hubby leaves town in the morning for a week, so I am hoping to finally get to some sewing in the next two days!!! 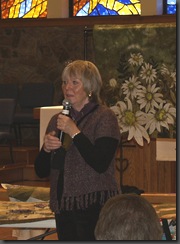 Yesterday, I had the privilege of visiting the Lake Oconee Quilt Guild in Eatonton, Georgia, where the speaker of the morning was Judy Simmons of Windy Hill Happenings.  I have been following Judy’s blog for several months now and was very excited to see her work up close and personal.

She presented a wonderful trunk show starting with the wearable items that she had in the Fairfield Fashion Shows of the past.  I remembered seeing many of these pieces, but had not put them together with Judy.  She then moved into her more recent quilts, which include some wonderful pieces that are reminiscences from her family and life.

She had several great suggestions…..one was to use all of your “extra bits” somewhere in the piece, whether as part of the back, or in the lining of a wearable.  The one idea that I am going to definitely use is to go to a hardware store and use paint chips to determine the actual color from a photo. 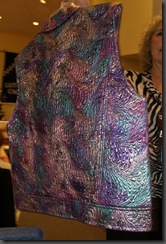 The technique that I admired the most was her ability to apply marbling to Tissue Lame fabrics.  The result was glorious!!!

Here are a few photos from the day……. 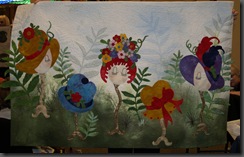 I loved the whimsy in this piece 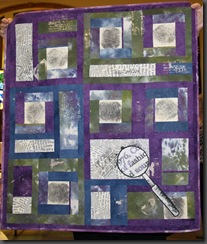 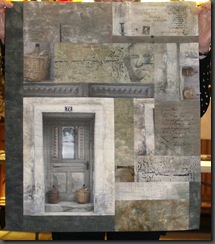 This wonderful quilt used prints of doors, people, textures and other objects.

These are all beautiful and all have stories behind them….. 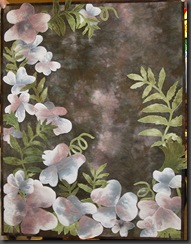 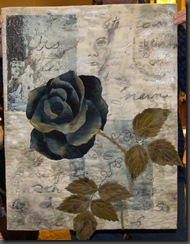 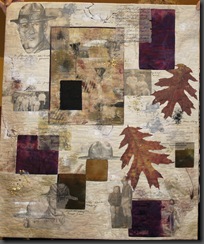 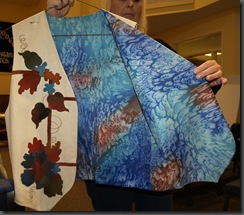 The lining fabric was dyed and sprinkled with salt while still wet to achieve this soft coloration.

It was a wonderful morning…..thank you to Judy and to Lake Oconee Quilters!!!

……and I am already feeling hectic!!!!   My week of sewing that was planned between Christmas and New Year’s ended up being a week of cleaning house,working in the yard and setting up a new computer and printer!!!!

Also, in the last few days we have found out that our son’s wedding date is now set for  July 17, and not in December as was the original plan.  My husband was invited to Kunming, China in March, and they have invited me to come as well, so we are looking at 10 days in China…..IN THE MIDDLE OF TAX SEASON!!!!

In with all of this, I have a guild challenge quilt due in 9 days and I haven’t even started on it!!!

OK…..deep breath…….it will all get done as long as I take it one day and one thing at a time.

SO, my New Year’s resolution is to continue moving  forward ONE DAY AT A TIME!!!!…..starting tomorrow! 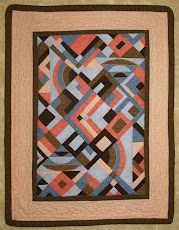